where N is the number of pixels inside the ROI. As an example, the top-left figure below shows an experimental image for a disc under diametric loading and the lower-left figure below shows the G^2 image calculated based on the experimental image. Both figures are colormap images: red means large value and blue means small value. For the G^2 image, the value of each pixel is the gradient square |\nabla I|^2 of the experimental image. The G^2 value for this disc is calculated by averaging the \nabla I values inside the disc, which is the ROI of the problem. 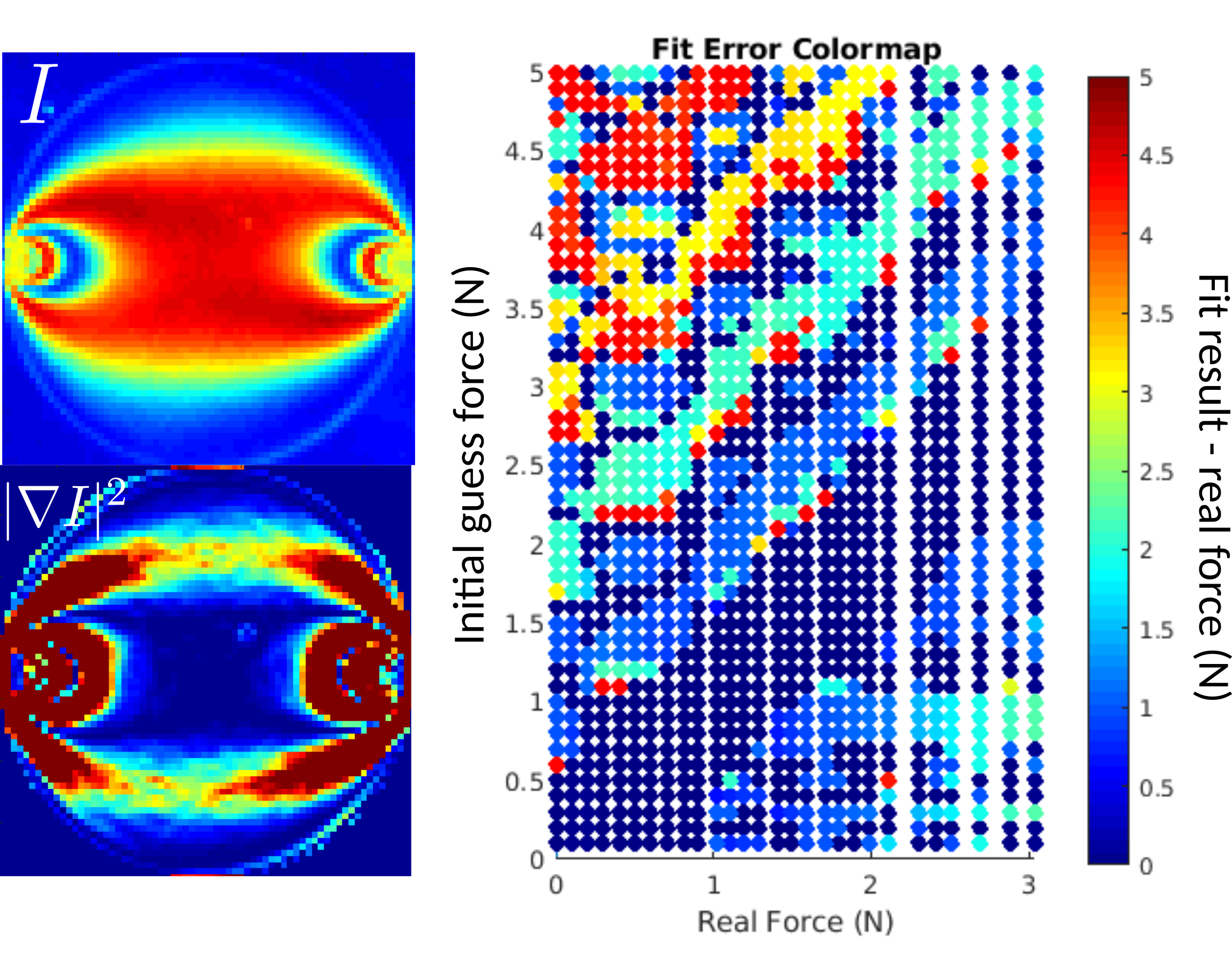 Although vector forces on contacts of discs can be solved by the nonlinear fitting algorithm, G^2 method remains a popular choice to estimate stress based on photoelastic fringes because the following reasons: (1) G^2 calculation runs much faster (2) G^2 works for relatively low resolutions and (3) G^2 does not rely on the initial guess of contact forces, which can be a problem for the vector force fitting algorithm. For example, the right figure above shows the fit error for diametrically loaded disc under different loading force (real force) and using different initial guess force for the nonlinear force fitting algorithm. It is clear that only when the gauss force is close to the real force that the fitting algorithm gives accurate results.

3.1. Comparison between G^2 and light intensity I

On single particle scale, G^2 is shown to be proportional to the summation of the magnitudes of the contact forces acting on the particle [4]. G^2 can measure larger forces than the intensity measurement when the resolution is high enough. The figure below show the evolution of G^2 and average light intensity I inside a numerical simulated disc. The horizontal axis is the diametric loading force. It is clear that G^2 saturates at a much larger force than the average light intensity I. So G^2 is a better stress indicator at particle scale than I if the resolution is not extremely low. 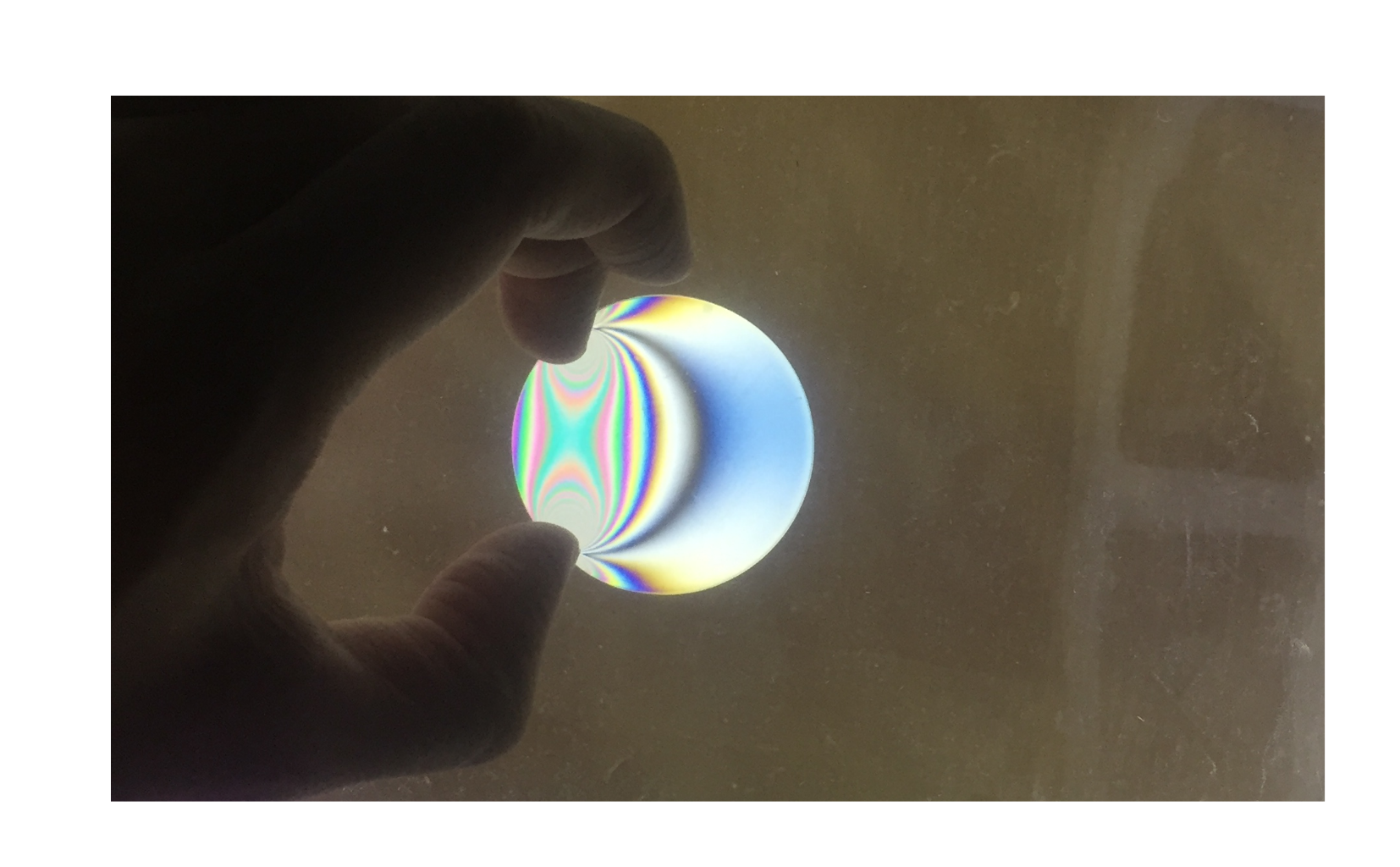 3.3. Experimental parameters that change the dependence between G^2 and the contact forces

The slope k of the linear dependence between the G^2 and the sum of contact force magnitude \sum_i|F_i| depends on many parameters: (1) The background light intensity I_0. (2) The stress-optic coefficient f_{\sigma}. (3) The radius of the disc R. (4) The resolution N defined as the number of pixels per meter. Theoretical derivations, supported by numerical and experimental tests, show k\propto I_0^2/(f_{\sigma}R^2N). A first intuition from this result is, in polydisperse system, the relation between G^2 and contact forces for particles with different sizes must be calibrated separately. [4]

The discussion so far only considered disc particles. An unproved empirical expectation is for particles with only point contacts the linear dependence between G^2 and contact forces on particle scale should still hold. However, when contact with finite area occurs, the G^2 value no longer uniquely determined by the contact forces. An example is shown in the figure below, where a square shape particle is under point-point diametric load (left) or surface-surface diametric load (right). The magnitude of the contact forces are same for both cases. But the photoelastic patterns are very different, resulting in different G^2 value.