Similar to the transmissive polariscope, both the polarizer and the analyzer should be circular polarizers. In assembling the circular polarizers, it is important for the principle axis of the quarter-wave plate to make a 45^{\circ} angle with the direction of polarization of the linear polarizer. Note that for a darkfield polariscope, the analyzer must match the chirality of the polarizer on the incident light path (see section 2. for mathematical proof), and can even be the same optical element. For a brightfield polariscope, the two polarizers are complementary. 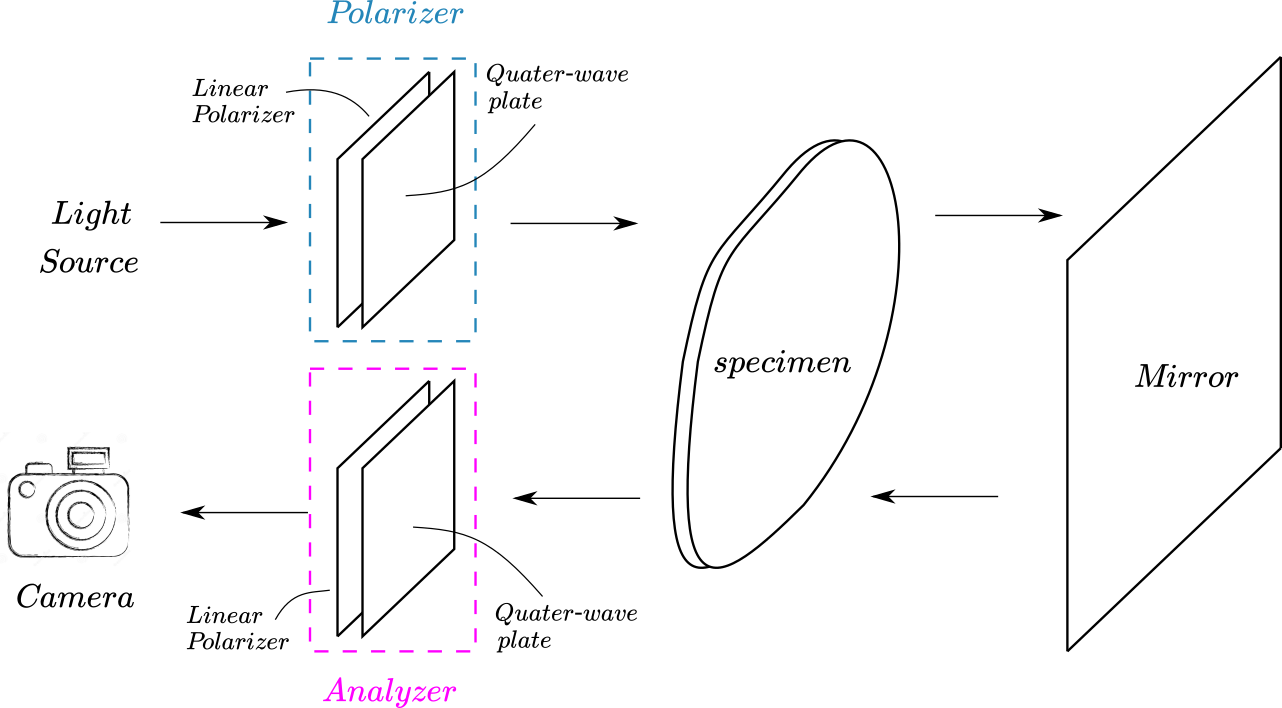 There are two typical ways to implement the mirror in real granular physics experiments: 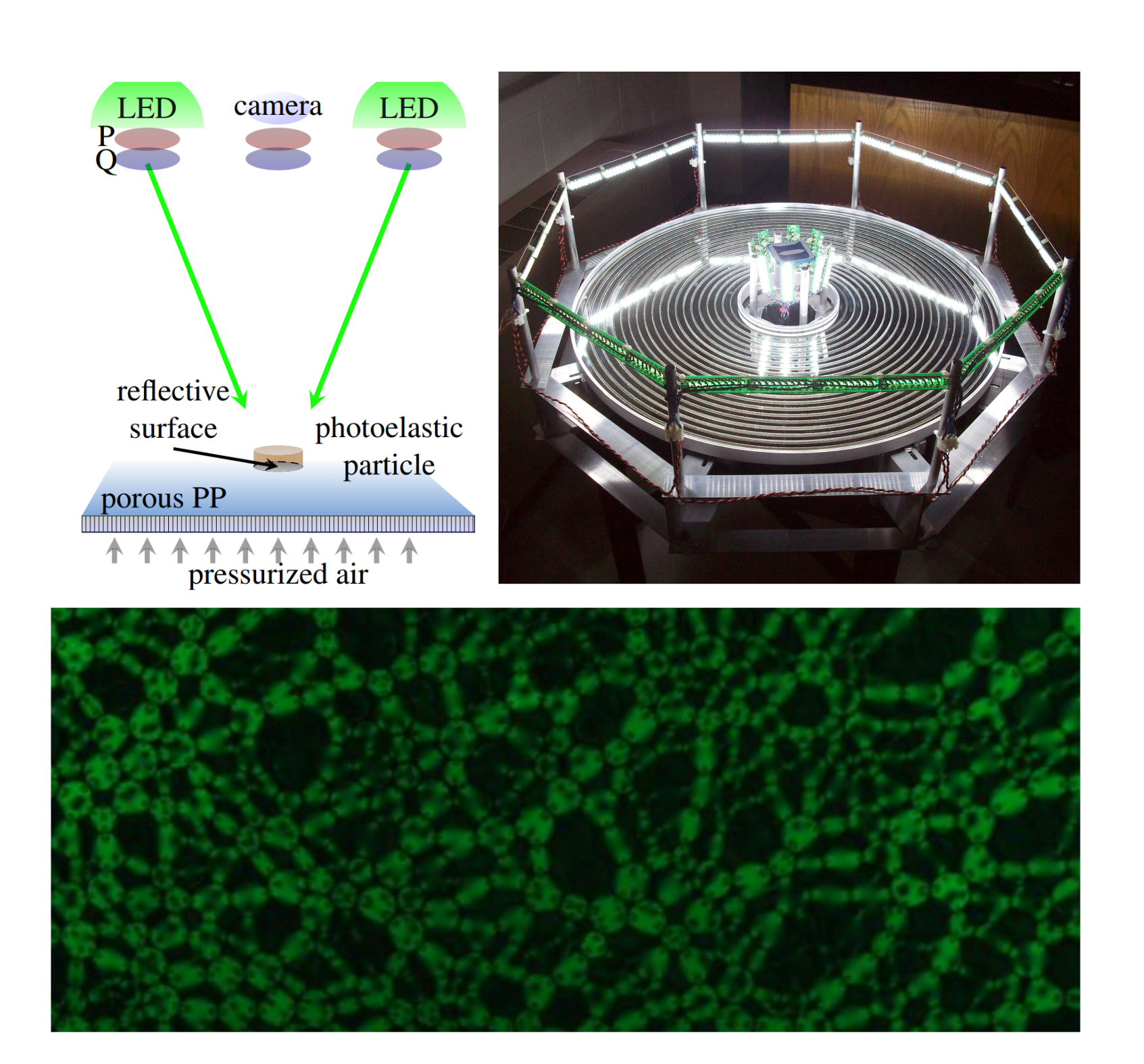 1.2. How to make the photoelastic particles reflective? 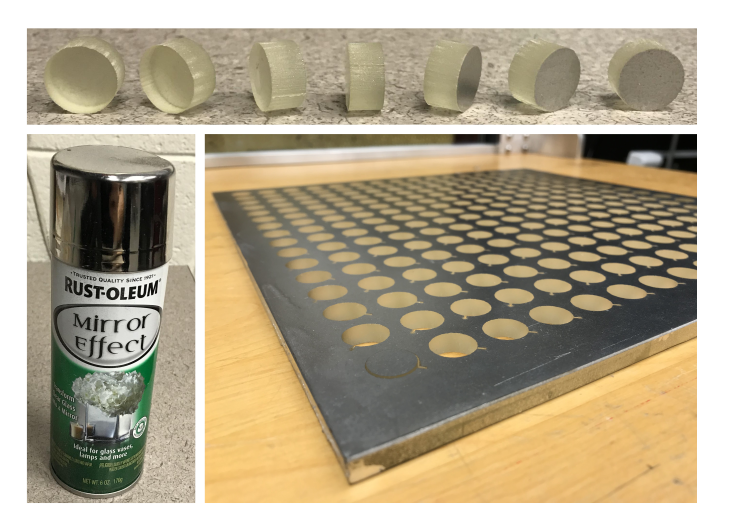 1.3. Determine the configuration of circular polarizers

In experiments using photoelastic particles, it is important to keep the light intensity distribution uniform among the system. Because both empirical pressure measurement and the nonlinear fitting force measurement depend sensitively on the background light intensity. The reflective polariscope has a higher chance to suffer from the light heterogeneity, comparing to the transmissive polariscope. First, the reflection light intensity is more sensitive to the relative position between light source, particle and camera (left figure below). Second, if the effective mirror is implemented using coated particles, small tilting of particles may induce big change of background light intensity for that particle (right figure below).

To reduce the light heterogeneity, the light source should have a large enough area. The light heterogeneity can also be reduced using the following trick. When taking photoelastic images using both Polarizer and Analyzer (left figure below), take another image without Analyzer while keeping everything else the same (middle figure below). The second image gives information about the background light intensity I_0 (see section 2 for details). Divide the first image using the second image results in a rescaled image with uniform light intensity (right figure below), which can be used in the data analysis afterwards.

The painted surface of particles usually can not reflect light as good as a commercial mirror. However, the coated particles are irreplaceable in cases where a mirror table can not be used. For example, in air table experiments (see J. Puckett et al. for more details). The mirror table solution also has disadvantages. In particular, the mirror image of the particle boundaries will be recorded by camera, creating additional difficulties for boundary detection. In most cases, coated particles work good enough. However the mirror table solution remains a choice when coating particles is not practical (for example if the same particles are also used in other experiments with transmissive polariscope).

In this section the theoretical background of the reflective polariscope is reviewed. In section 2.1. the relation between local stress and the light intensity recorded by camera is derived. In section 2.2. a proof for the chirality change of circular polarized light after reflection is presented.

2.1. Photoelasticity in the reflective polariscope

As shown in the above figure, under reflective polariscope, the circular polarized light goes through the photoelastic specimen twice with different chirality of polarization. Suppose the height (the size along z direction) of the specimen is h, the pattern observed here will be the same as the pattern formed by a h/2 height specimen using transmissive polariscope. This can be shown as following: suppose the linear polarizer creates a polarized light along $\hat{y}$ direction. In region (1) denote the light vector as:

where I_0=|E_1|^2 is a constant called the background light intensity, k is the wave number and \omega is the frequency of the light. Suppose the principle direction for the stress tensor of the specimen point under consideration is \hat{m_1} and \hat{m_2} (corresponding to principle stress \sigma_1 and \sigma_2 respectively). Denote \phi = \alpha - \pi/4. Then in region (2)

After reflection, the electrodynamic boundary condition requires a \pi phase shift for both components of the light (see section 2.2.). So the reflected light in region (4) is:

Passing the quarter-wave plate again gives a -i factor to the \hat{f} component:

Finally, the light intensity that can be observed by the observer behind the linear polarizer is

Note for a transmission polariscope the corresponding expression is I_0sin^2\frac{\Delta}{2}. This different needs to be taken care of when solving the contact forces by nonlinear fitting -- the stress-optic relation used in transmission polariscope can not be used directly to fit the patterns recorded by the reflection polariscope. Also note when \Delta=0, i.e., for a stress-free specimen or no specimen, I=0. This is why metal looks black under a circular polarizer with wave plate side towards the metal.

A mirror is usually implemented by a smooth layer of metal. Inside a metal (or any conductor), the solution of Maxwell equation gives electromagnetic waves with complex wave numbers. Without lost of generality, we consider a monochromatic solution with frequency \omega.

where \epsilon is the electric permittivity, \mu is the magnetic permeability, \sigma is the conductance of the conductor which connects the electric field \vec{E} and the free current density: \vec{J}

The light transmitted into metal will have complex wave number:

Inside the metal, from the continuity equation for free charge one can solve the free charge density \rho_f(t) = e^{-t/\tau}\rho_f(0). For a metal that is a good conductor (\tau is much larger than any interested time scale), \rho_f(t)=0 effectively. As a result, the boundary condition at the air-metal surface becomes:

This means a \pi phase shift is given by the reflection on an ideal mirror. Note the above calculation is for a linear polarized light. For a circular polarized light, after reflection, both its \hat{x} and \hat{y} components (can be regarded as linear polarized light themselves) are shifted by a phase factor \pi. So the relative phase difference between the components of light remains unchanged. Therefore, the rotation direction of \vec{E_R} in the xy plane remains the same as \vec{E_I}. However, the direction of the propagation is changed, so the chirality of the light must be reversed. This effect is shown in the section 2.1. figure region (3) and region (4).